In celebration of the PUP – Sta. Rosa Campus’ IT Week 2015, with the theme ‘3D: #Dream # Develop & #Deploy; Ideas today for Integrating Tomorrow’ the PUP-SRC Mozilla Club partnered with Eligible League of Information Technology Enthusiasts to bring a Maker Party into the campus. A Maker Party is Mozilla’s campaign which aims to help people increase their understanding on the web and take greater control of their online lives. Below is a video explaining what a Maker Party is.

This Maker Party aims to teach the HTML Basics to students from PUP-SRC who have no knowledge about HTML. We had over a hundred sign ups so we decided to divide them into batches. Each batch ran for around an hour and a half with almost 50 participants per batch. I got the Puzzle Idea from the  Mozilla Learning Network and tweaked it.  Wendy Aguilar made a web page that we used as a sample for this Maker Party. (link here)

After a brief introduction of Mozilla and HTML Basics we gave a post it note to each participant containing an HTML tag. Then we asked them to find the pair of the tag they are holding.

After they found their partners we then started constructing our web page on the wall. We had 2 printouts given to every pair, the first are the contents of web page and another is a final page screenshot which would serve as guide for what HTML tag goes with what. The facilitators took turns on explaining how each HTML tag is used and the code structure.

The facilitators and I had a quick discussion after the first batch because posting the tags on the wall takes up a lot of time. We decided to come up with a different flow compared to what we originally planned. We let the HTML tags remain on the wall and removed only the contents.

Then we grouped the participants and gave them the printouts. We tasked them to figure out what tags go with each content with the final page screenshot as a guide. 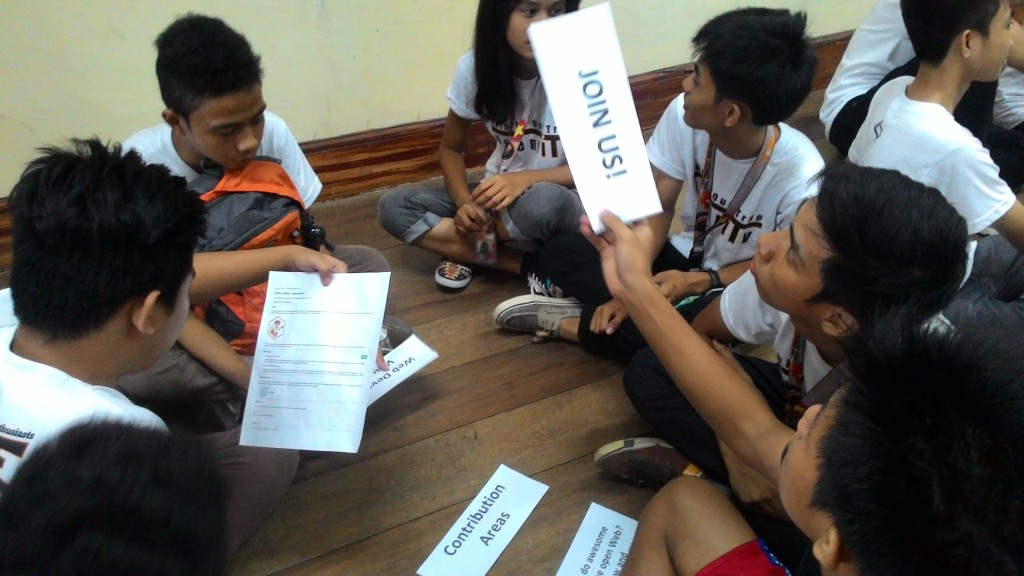 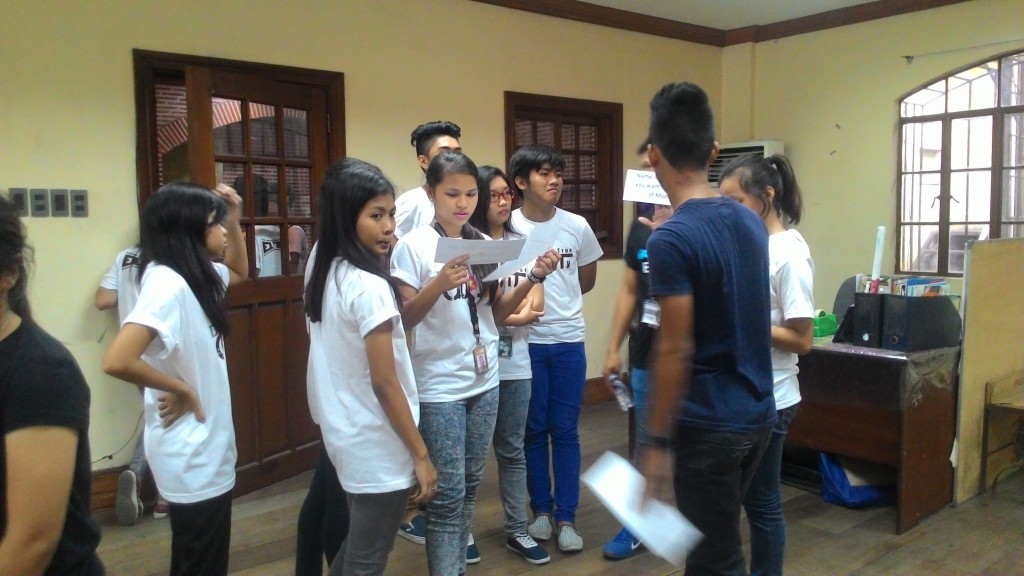 Then as every group puts content on the respective tags, the facilitators explained further what each HTML tag does and some of its attributes.

Here is our finished HTML page on the wall. 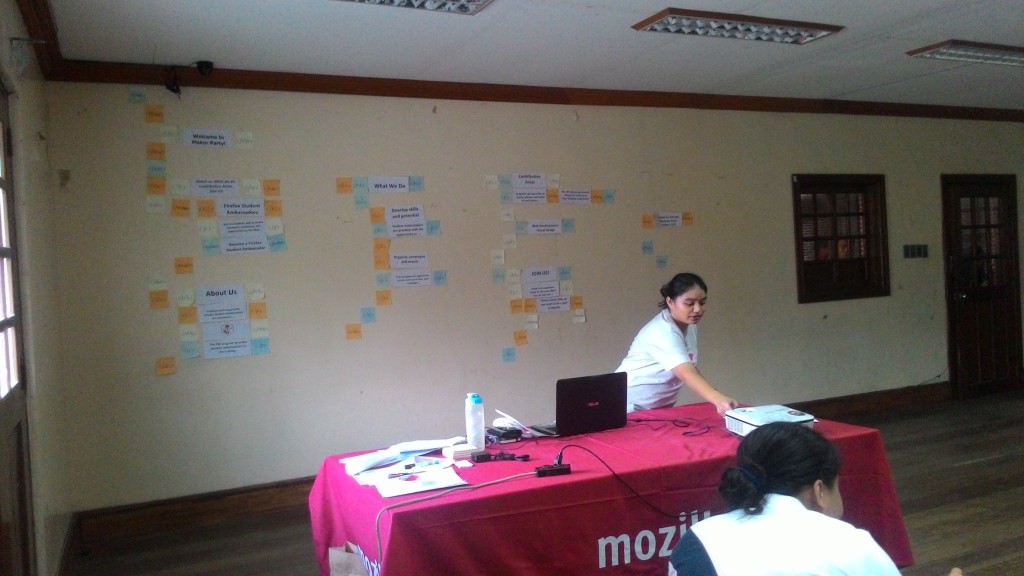 After finishing the webpage on the wall, I showed them Mozilla Thimble and how their code looks like on it. I also had a demo on how Thimble can guide them on building their own webpages.

We had a total of 138 participants for the 3 batches and the event was a success because they learned the basics of HTML: start tags and end tags, HTML Page Structure and the different HTML tags.

Here are the feedback from people who helped us in making this event a success.

Arlene Taliente: “It was great and overwhelming! Because they are all participating and enjoying the activities we gave to them. Indeed, they’re really awesome!”

Vennis Sacro: “With the Maker Party, not just my fellow students did learn but also me. I was able to review HTML codes. Can’t wait for the second part.”

Wendy Aguilar: “PUPSRC’s Maker Party was really a success. I had this awesome experience in sharing my knowledge to not just few, but over a hundred students of my ‘Sintang Paaralan’. I’ll work hard to be better, for me to share more. Thanks guys! Let’s work together in keeping the web open.”

John Leo Marinas: “Well, in the first place I don’t know what help can I do for the Maker Party since this is the first time I am volunteering. But I enjoyed being in the registration and guiding the participants. To sum it up, I enjoyed lending my time so help in this event. If there will be another Maker Party and I have a free time and available, I will help again.”

Rey Aguilar: “The event went well. Everything happened as expected, every guests had learned a lot while having fun and so the maker party may be considered a success!”

JC Hernandez: “It’s been a great opportunity that Mozilla has been a part of IT Week 2015, I knew ELITE students learned more and linking our theme: ‘3D: #Dream # Develop & #Deploy; Ideas today for Integrating Tomorrow’ they would be able to dream, develop and will be deployed for their future career.”

Elaine Gutierrez: “It’s fun to see that the 1st and 2nd year students are getting to see that Information Technology isn’t just logic and codes, but what it means to to the world. With the help of the Maker Party they can do a HELLO WORLD using HTML by using tools like Thimble.”

Aouie Figueroa  (ELITE President) : “Having Mozilla Philippines as one of our partners in the fulfillment of our IT Week Celebration 2015 is such a big pleasure and opportunity. Students have definitely enjoyed and learned a lot of things from the Maker Party. In behalf of the organization, I would like to congratulate all the FSAs, facilitators and speakers for the success.”

In behalf of the PUP – SRC Mozilla Club, I wanted to thank the participants for joining and ELITE for providing the resources that we needed to make this Maker Party a success.

We are currently on the process of organizing more events so stay tuned!